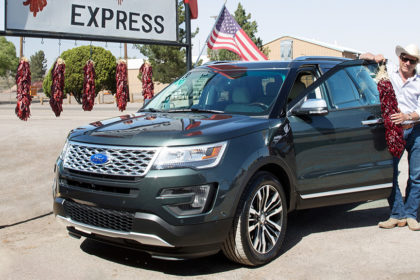 A New Mexico native hits the road in search of the state’s spicy treasure.

As soon as I moved to northern New Mexico in 1996, I bought just the vehicle to facilitate the kind of adventurous life I sought in the Land of Enchantment—a beloved Ford Explorer Sport, which took me fishing on the Pecos River, exploring ruins in Chaco Canyon and more. Twenty years later I am about to embark on yet another adventure, this time in the new Ford Explorer 2016: the quest to find the perfect chile pepper, New Mexico’s best-known produce.

New Mexico is the only state with an official question: red or green? That is, do you prefer red chile or green chile? While I’ve always enjoyed the fiery flavor of chiles (not to be confused with Texan chili, a conglomeration of ground meat, beans and chili powder), this journey promises to take me beyond the restaurants of Santa Fe and Albuquerque to find out what makes New Mexico the ideal climate for this unique fruit.

I want to start with the experts, so the Explorer’s journey begins in Las Cruces, home to the Chile Pepper Institute at New Mexico State University. Founded in 1992 by Professor Paul Bosland, the Institute builds on the work begun by horticulturist Fabian Garcia, the father of the modern chile pepper industry, who was the first to begin standardizing chile varieties in 1888. Dr. Bosland, who has dedicated himself to chiles since joining the faculty and research staff in 1986, explains that in ancient times chiles were used medicinally, noting that “the little pain caused by the heat of the chiles can block out the big pain.”

Bosland explains that one of the most important trends in chile research is flavor. For years, the focus had been on yield, but with the locavore movement taking off, things changed. “Growers asked us if we could go back to the original New Mexico flavor, the original taste,” Bosland says. “It took researchers 10 years of work, but they finally came up with the NuMex Heritage 6-4, which contained six times the flavor of the standard chile.”

To the uninitiated, a chile is a nefarious little fruit bred to scorch your mouth and make your eyes bug out. To be sure, there are those breeders and aficionados who love their chiles blisteringly hot, but for daily consumers of chiles, it is a balance of flavor—citrusy clean greens or smoky reds—with just enough heat to trigger the euphoria that follows a chile’s sting. Says Bosland, “I tell people that chiles are like fine wine. Once you’ve had great wine, you don’t want the cheap stuff.”

I head the Explorer north on Interstate 25 toward the small farming community of Hatch. Hatch calls itself the Chile Capital of the World, and every Labor Day more than 30,000 people descend on the village of 1,600 for the annual chile festival. The Explorer bounds along the small highways and county roads that parallel the Rio Grande, with the available 365 hp 3.5L EcoBoost® V6 engine providing plenty of power along the way.

At Hatch Chile Express—a veritable chile supermarket—I meet Jimmy Lytle, a third-generation chile farmer whose father, Big Jim, was one of the men responsible for the state’s favorite chile. Lytle’s whole family is involved with chiles, from running Hatch Chile Express to working the farm. He explains to me that a unique combination of rich soil, altitude, climate, and water from wells and the Rio Grande is what makes the chiles from Hatch so special. “I have a friend down in Las Cruces and every year we start out with the same seeds and grow chiles,” he says. “Finally one time he says, ‘Jimmy, it doesn’t matter what I do, it just doesn’t taste as good as one of your chiles.’ ”

Jimmy also explains that the Big Jim is bred for different heat levels. The mild is generally roasted to make chile rellenos, while the hot can have almost as much kick as a jalapeño.

Using its convenient hands-free liftgate, I load the Explorer Platinum with a couple of ristras­ of dried red chiles, two shopping bags filled with different chile powders and some frozen packets of fresh 6-4s, and then head north to Santa Fe to see what an expert might do with this kind of haul.

It’s in Santa Fe that now-retired chef Mark Miller turned the world on to New Mexico chiles and Southwestern cuisine at the famous Coyote Café in the ’80s. I’ve had many memorable meals at Coyote over the years, every one with just the right lashings of local chiles.

The streets in downtown Santa Fe are narrow and parking is as tough as it is in San Francisco. Miraculously, I find a small space just a block from the café, and the Explorer guides me in with help from the available enhanced active park assist system with perpendicular parking.*

Inside the Coyote I meet its current chef and owner, Eric DiStefano. A Pennsylvania native trained in classic French cuisine in New York, DiStefano recalls being a bit dubious about incorporating chiles when he first arrived in New Mexico. He explains that marrying a New Mexico native helped. “Every year they get their bushels of roasted chiles, clean them, and put them in the freezer so they can get their chile fix year-round. Now I do the same thing. It’s addictive.”